* Breezy Boxers is white boxer friendly. White boxers make just as wonderful a pets as the more standard colors!  In fact our very first boxer was white and deaf, we signed to her :).  However, we do not condone or encourage the breeding of white Boxers in any way! *
A test called the BAER Test can be done on a puppy as early as 7 weeks of age.  This testing can tell if a boxer puppy is unilateral or bilateral (one ear or both), or if lower or higher frequencies can be heard.  In Minnesota the University of Minnesota Veterinary Medicine, Neurology Department does this testing in St. Paul, MN.  As of 2015 the cost for this screening is $41.00, more if the puppy needs to be sedated.
1-612-624-5398. 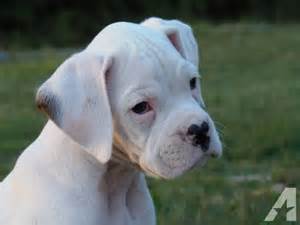 Are white boxers rare?
No. White Boxers are not at all rare. According to the American Boxer Club, white Boxers make up 25% of all Boxers in the United States. They are not the result of genetic birth defects, but simply result from a breeding where both the mother and the father have the gene for a white coat. Because of the propensity for breeding “flashy” Boxers in the United States, many white Boxer puppies are produced. Approximately one in four puppies are white (either all white or majorly white). Therefore, this is not a rare color.

Are white boxers a "new" color?
No. Ch. Blanka v. Angertor, one of the founding bitches of the breed, was white. Many of the original Boxers were white and could be registered in Germany until 1925. Difficulty arose in using white Boxers in police work, as they could easily be seen at night. For this reason, Germany eliminated the ability to register white dogs and some breeders began to kill white puppies. This was the start of the controversy surrounding white Boxers.

Do white Boxers have health problems?
Contrary to popular belief, there is no evidence that white Boxers are more susceptible to diseases. An estimated 12-14% of white Boxers are deaf due to a lack of pigmentation of the hair cells in the ear and may sunburn more easily than colored Boxers.

Should you breed a white Boxer?
NO!  It is irresponsible to breed your white Boxer regardless of bloodlines, etc. because of the higher incidence of deafness in whites. Breeding whites sustains the recessive gene, even if no ill effects are observed in the immediate offspring. A few generations down the line, an animal will suffer from a condition it must live with for life because you wanted to breed your white Boxer.

Quick FACTS
1. They are not rare -Approximately 25 percent of all boxers born are white.
2. They are not albinos – They have colored eyes, colored touch, inside of the ears, belly and bottom of the paws.
3. They can sunburn easy
4. They can be deaf and this is one of the biggest reasons why most breeders do not purposefully breed for the white color. Approximately 25 to 30% will be deaf either in one ear or both.
5. Blindness is a bit more common with the white Boxer.
7. They can be registered BUT they currently do not meet the American Boxer Club's standard. The member’s code of ethics states that it is an infraction to register with the American Kennel Club a Boxer of any color not allowed by the set standards. The AKC will deny registration for any puppies born to a registered white Boxer.
8. Due to the fact that deafness IS more common with this colored dog, it is highly recommended to spay/neuter your white Boxer unless you are planning on keeping all of the potential puppies…since public opinion may make it difficult to place them in loving homes.
9. They have the same temperament and personality as other Boxers..They are happy, loyal, social, friendly dogs when raised in a loving, appropriate home.